In order to give you the best experience we use cookies to enable you to navigate our website and to analyse traffic and behaviour to improve our website. We use third party analytics to understand more about your use of our site (more information about this is available in our STRmix™ Cookie Policy available for review under the ‘Manage cookie settings’ button).

With an ever growing range of functions underpinned by world leading statistical and biological modelling, STRmix™ enables forensic biologists to:

Enter a contributor number range when performing a deconvolution.

Assign an LR varying the number of contributors under the prosecution and defence propositions.

Set the number of major contributors to a mixed DNA profile you are interested in and obtain an LR only for these.

Model any type of stutter observed within your STR profiling kit, now including improved dropout modelling allowing analysis of DNA profiles with a low, or even no analytical threshold.

Use laboratory-specific settings to perform calculations suited exactly to that laboratory’s results.

Visualise the weights generated to help analysts investigate the interpretation.

Search a deconvoluted DNA profile directly against a database without the need to interpret a single source component.

Combine multiple amplifications of the same DNA extract into one interpretation, even when generated with different multiplexes.

Include related individuals as alternate propositions in the LR.

Carry out familial searches against a database, searching for close relatives of contributors to mixed DNA profiles.

Generate fully configurable (and if required, retrospective) reports including a CODIS report.

STRmix™ has been used for routine casework interpretation at ESR and FSSA since August 2012 and is now the Australasian standard for DNA interpretation.

In one case, a mixed DNA profile was obtained from a semen stain on a carpet at the scene of an alleged sexual assault involving two male offenders. DNA present in approximately equal proportions from two individuals was detected (see EPG below). This profile was unsuitable for database searching using traditional DNA interpretation methods. Using STRmix™, the profile was interpreted assuming the profile originated from two contributors and compared against a database with over 145,000 profiles. The crime profile matched two individuals. 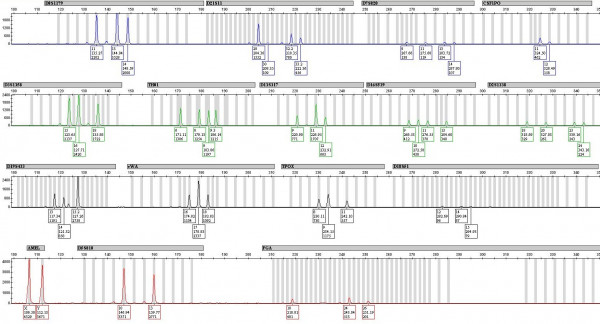 This case highlights how STRmix™'s database search function can provide investigative information. It can also be used to validate complex mixtures where contamination is suspected.